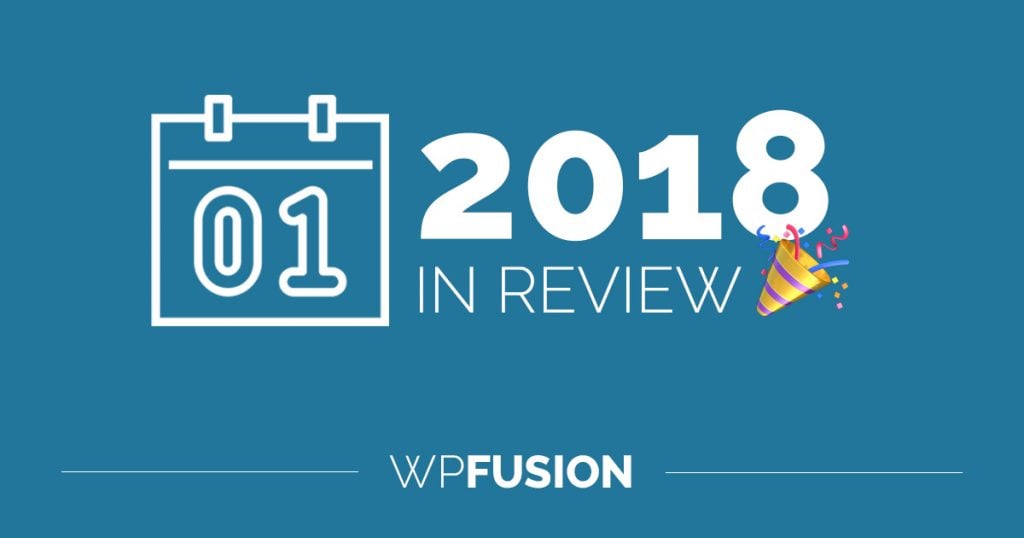 Another year has come and gone, and it’s time again for our yearly review!

Not only is WP Fusion open source software, but we try to bring an “open source” mentality to our business as well. We hope this gives our customers confidence in our ongoing support for our products, and also maybe helps other developers and small business owners as they grow their own projects.

Plus it’s a fun way to geek out over numbers and charts!

You can check out last year’s review here.

Let’s start with what’s changed. A year ago WP Fusion was 42,219 lines of handwritten PHP code (not including external libraries, etc).

(If you run the character counts and do a bit of averaging, that works out to a 433,200 word book. Just shy of the length of the entire Lord of the Rings trilogy. 😉)

We did 49 versioned releases in 2018, averaging about one every week.

Wow! So what’s been added?

We’ve been adding support for new CRMs and marketing automation systems all year. Basically if it has contact records and some way of segmenting them, we can make it work with WP Fusion.

Last year we supported 7 platforms. Now we support 27. In 2018 we added support for:

We now support 58 different WordPress plugins. Here are the new ones we added in 2018:

So let’s take a look at how people are using WP Fusion. Here’s a breakdown of our most popular CRM integrations: 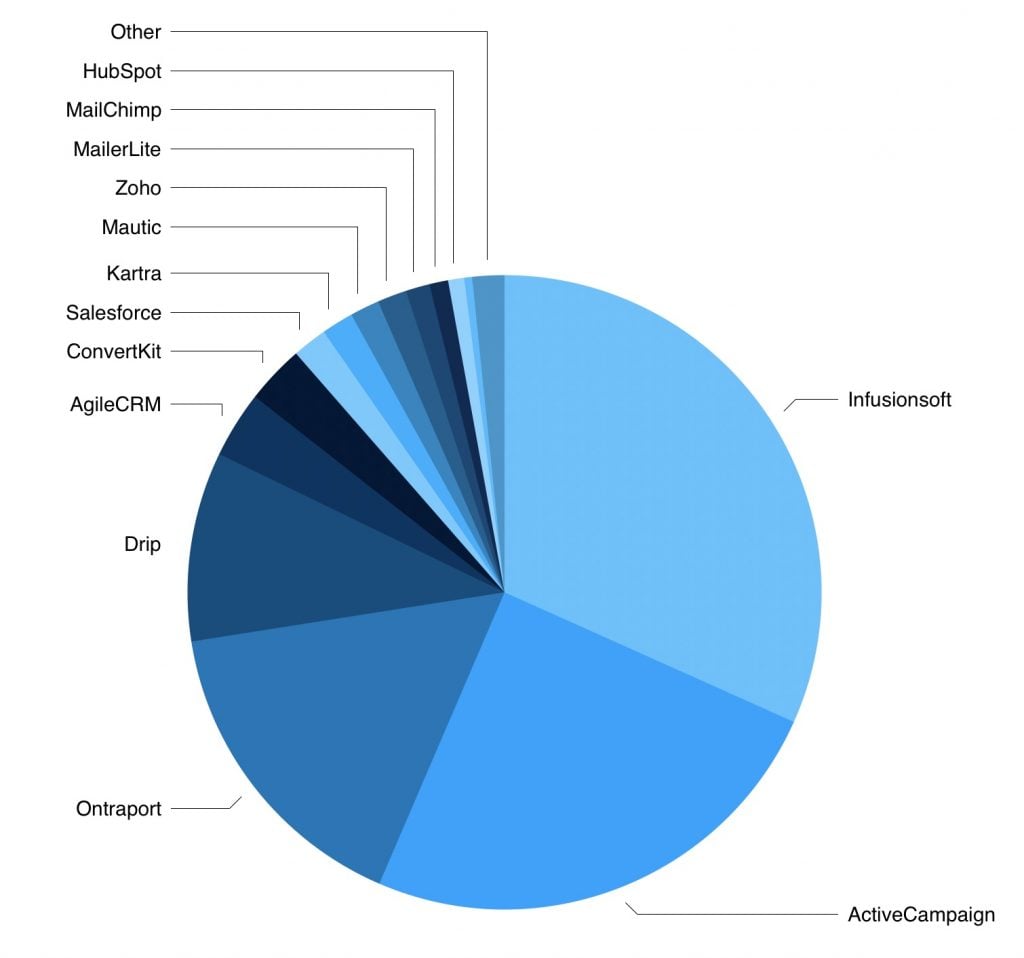 Nothing too surprising from last year, but there are some changes. Infusionsoft has notably dropped from 46% of our user base down to 32%, perhaps as people seek out more modern and more affordable CRM solutions.

The change is even more noticeable if we remove our newer CRMs and do a straight comparison between this year and last.

Here’s a visual breakdown of our most popular plugin integrations for 2018: 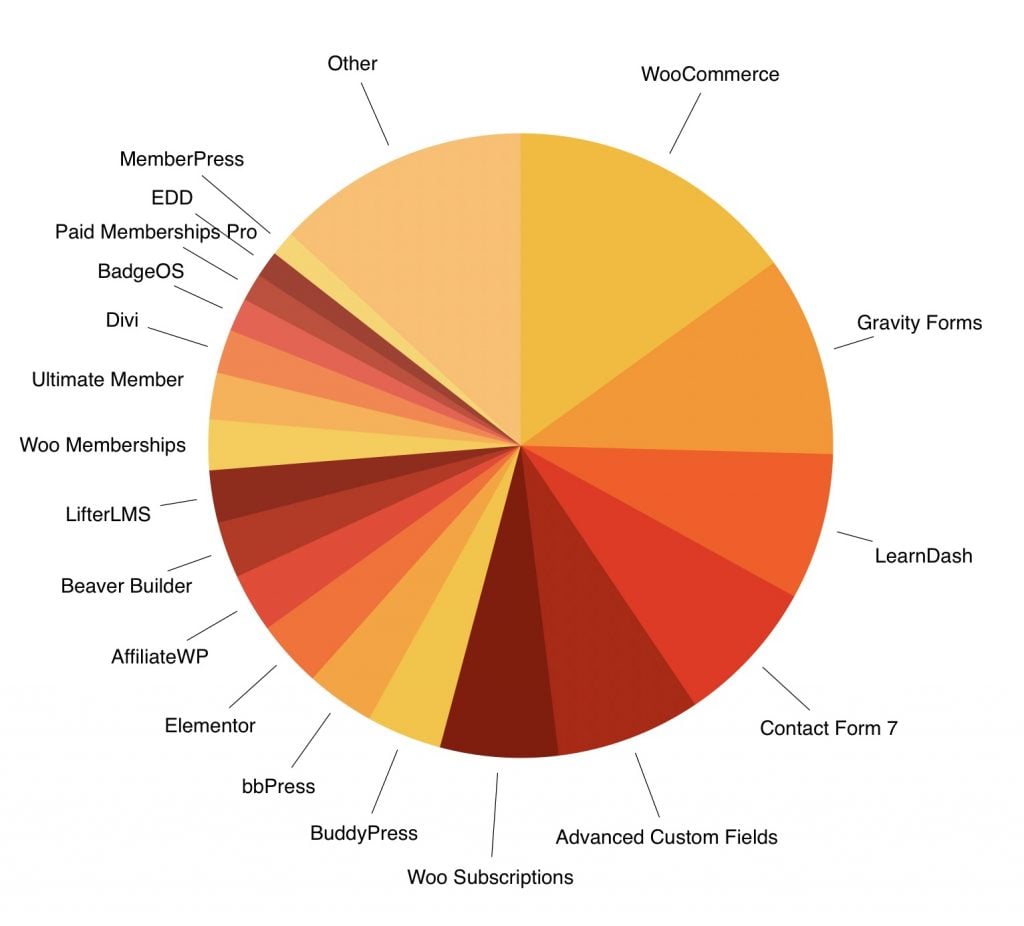 This chart is not quite as straightforward since we’re counting the number of times a particular integration is loaded via WPF against all integrations that are loaded. So while here WooCommerce has about 15% of the pie, it’s closer to 50% of our customers who are actually using WooCommerce.

Across email support (via HelpScout) and chat support (via Chatra) we had 2,168 support conversations this year, with 4,287 messages received. 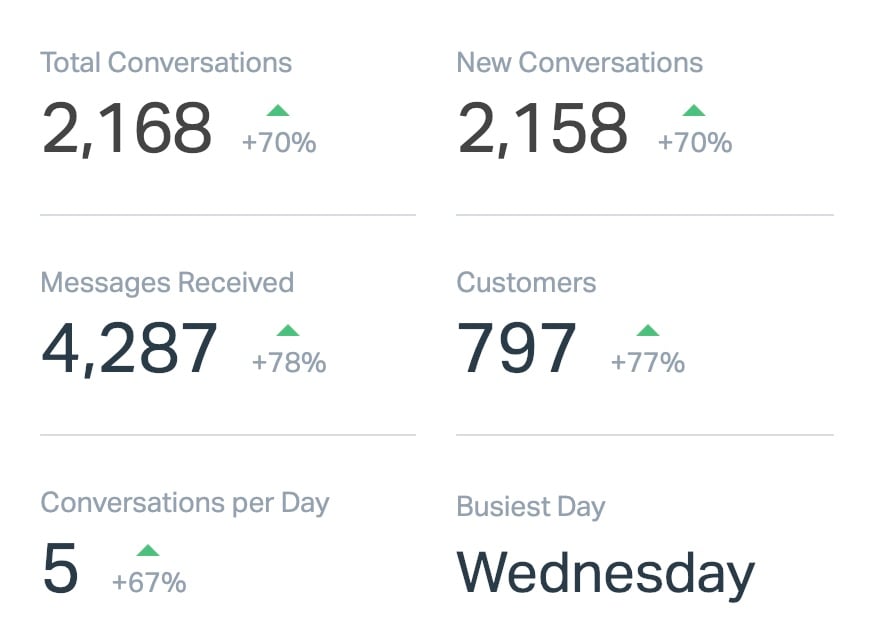 This is a roughly 74% increase in support ticket volume over last year. Thankfully this is still comfortably manageable by just myself handling support.

We’ve been hesitant to bring on additional support reps as I’ve seen many cases in which the quality of support declines considerably once that happens.

However, it may be eventually necessary to bring in a “Tier One” support team to answer basic questions, while still escalating anything technical to myself or one of our developers.

Here you can see our support volume by month, segmented by chat and email support. Support requests ticked up slightly in November and December after our Black Friday promotion, but were otherwise pretty consistent throughout the year.

Response times are very important to us, especially since WP Fusion is a critical component in many of our customers’ ecommerce and membership platforms.

(Note all response times are measured during active business hours)

Our official policy is to reply to all requests within 48 hours, but we aim to resolve them as quickly as possible. I personally feel it’s better to be surprised by a fast response, than expecting one the same day and not having it come.

Last year we had an average 4 hour and 46 minute response time to support tickets, and I’d (perhaps naively) written, “We’re going to try and match or improve upon these numbers in 2018.”

Well, we did! Here are the numbers for this year: 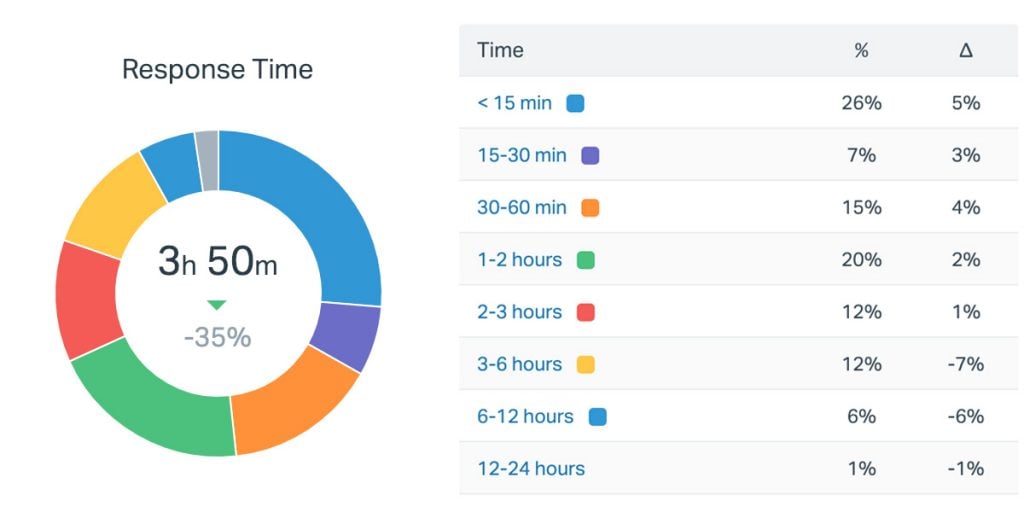 Average response time for all support messages dropped to 3 hours and 50 minutes, 35% faster than in 2017. 26% of tickets were replied to in under 15 minutes. 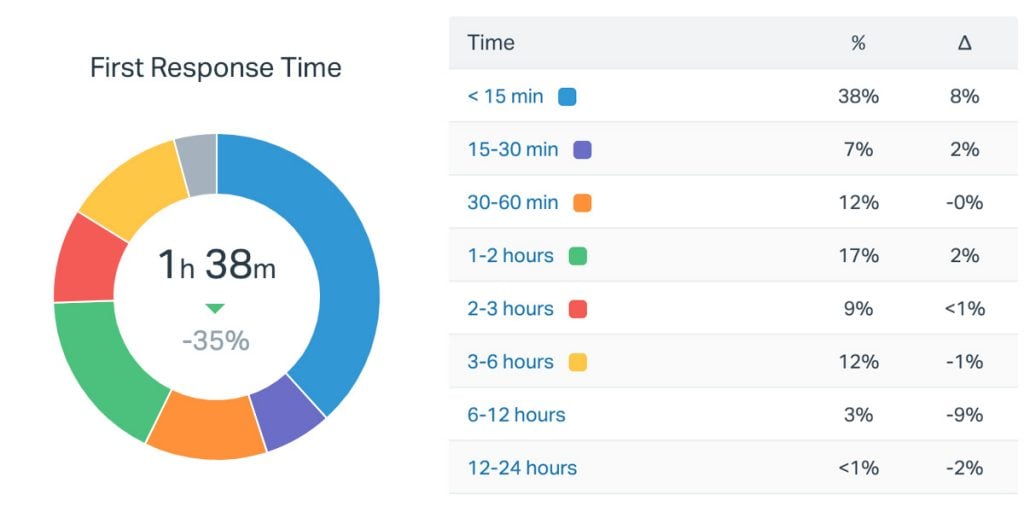 The first response time (the time to respond after a new support conversation is first opened) also dropped 35% to 1 hour and 38 minutes, with 38% of tickets being replied to in under 15 minutes.

I’m pretty happy with these numbers, and I think this is far and above industry standards for plugin support. We’ll try to maintain these levels through 2019.

So how much time does this all take?

I’m religious about tracking my time (using Toggl). Basically if it’s anything remotely related to work, I log it as a time entry and categorize it.

I’d encourage any developer (even if you’re just a freelancer) to use some sort of time tracking tool. It lets you visualize your productivity and efficiency over long periods, and identify areas where your time might be better spent. 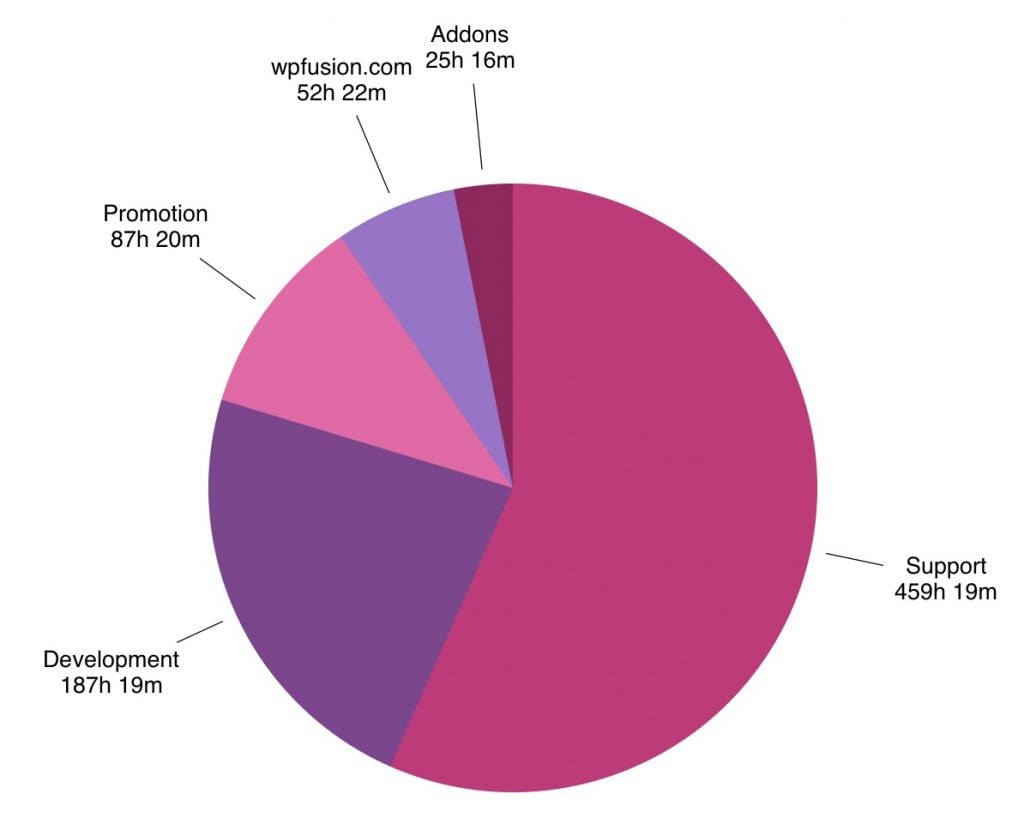 Here you can see a breakdown of all the time spent on WP Fusion in 2018.

2017 had 202 hours logged as development time, so that’s remained about the same this year (with just an 8% decrease).

We processed support tickets and chats from 797 individuals (both customers and prospectives) in 2018, meaning the average person received 32 minutes of support time. However, this is a bit of a broad generalization as many customers don’t contact us for support.

I can’t run that report on just this year for lack of some data (😩), but we can see historically that 46% of paying customers request support in some form, while 54% do not.

Our development time is also broken down by release: 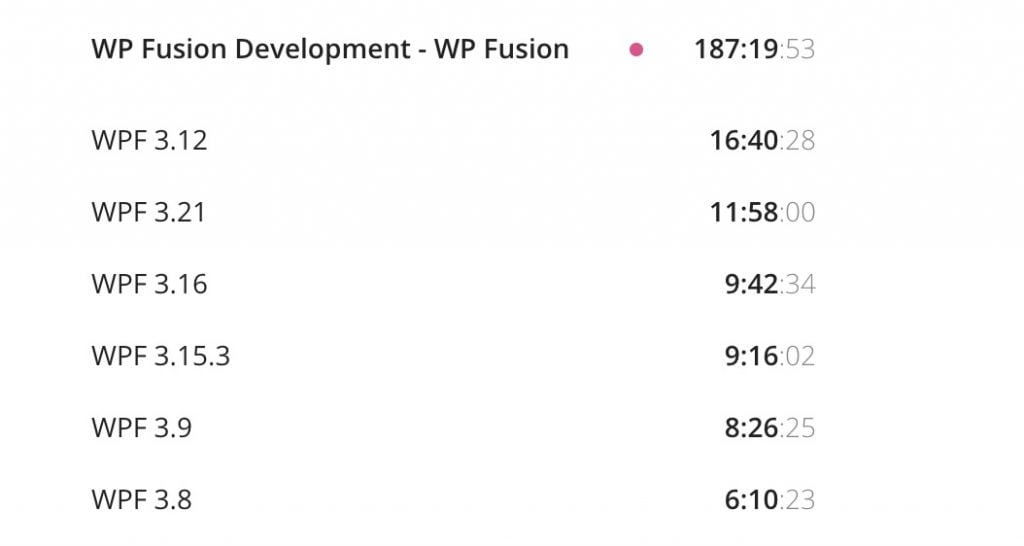 Version 3.12 was the most work this year, when we introduced Zoho, Kartra, and ConvertFox CRM integrations all in one release. For the full release details for each version check out our changelog.

Now for the juicy parts! Yes, WP Fusion is growing in popularity, and is profitable, so we plan to be around (and expanding) for the foreseeable future.

Similar to last year our best months were in late summer and November, when we ran our Black Friday promotion.

We only do one promotion per year for Black Friday / Cyber Monday, and with a 30% discount this tends to bring in a lot of new customers.

License renewals are an important metric to us, because if people renew their license that means they appreciate the value of our support and the continued updates we are delivering.

I’ve used two calculation methods for assessing our renewal rates. The first is to look at all of our customers since we launched WP Fusion, and generating a percentage based on those who have renewed their license at least once.

In January of 2017 we activated EDD Recurring Payments and began putting customers on automated license renewals. This had a significant effect on the number of customers who renewed their licenses.

To see that effect, the second method of calculation I’ve used is to look at all customers who purchased in a given year, and see if they renewed their license in the subsequent year. 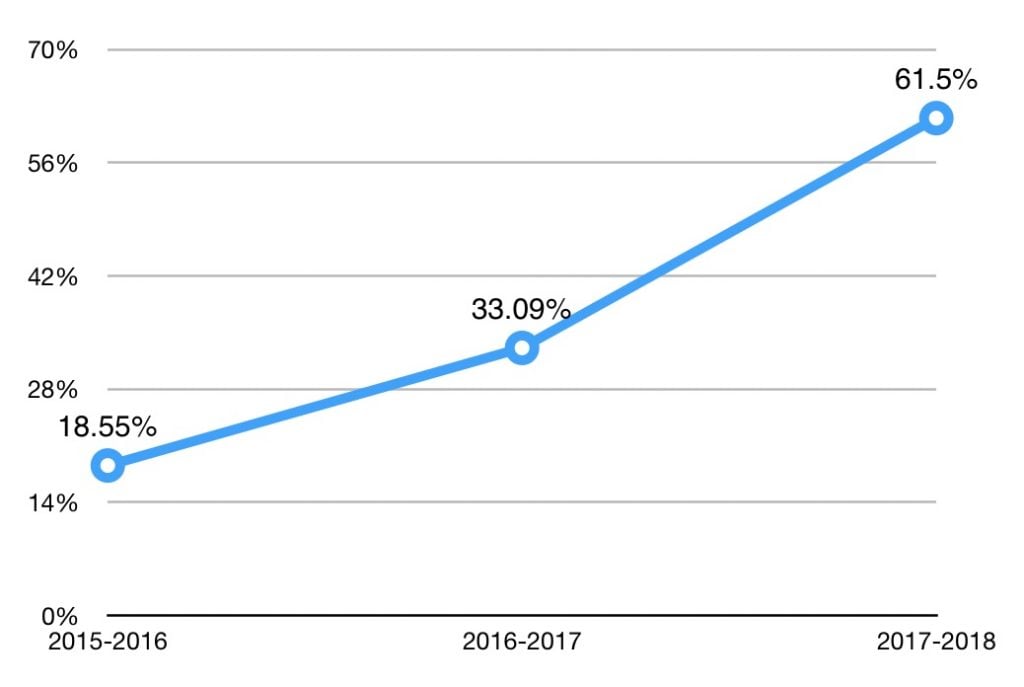 I’m really proud of this number, as it means the majority of our customers are valuing our support and updates enough to keep their licenses active.

We also saw our web traffic increase by about 100% this year, with most of the growth happening in the second half of the year. Here is a comparison from Google Analytics showing 2018 numbers against 2017.

Our session durations went down and bounce rates did go up slightly, but I attribute that to the period we were running AdRoll retargeting ads, as well as some Facebook ads that resulted in a lot of clicks with immediate exits (and no conversions). 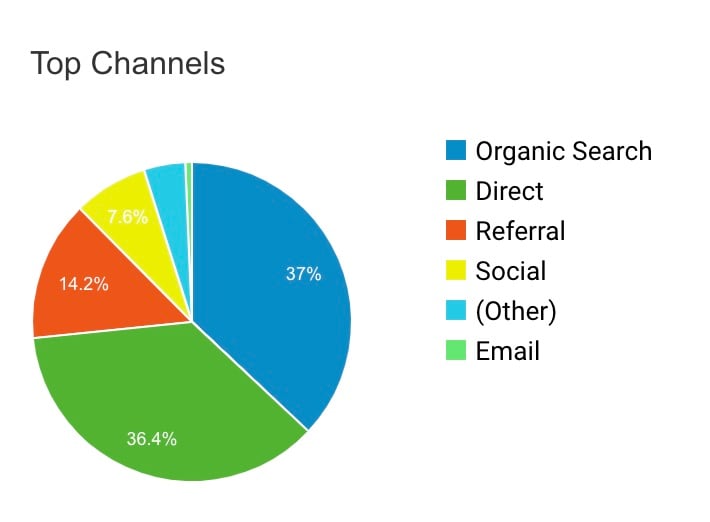 To better understand the organic search data, we implemented Keyword Hero early this year, which removes many of the (not provided) entries in Analytics’ reporting on Organic Search terms.

This has given a lot of insights into how exactly people are finding WP Fusion.

The full data set is immense but here is an example of one page of our Organic Search reports using the Keyword Hero view in Analytics. 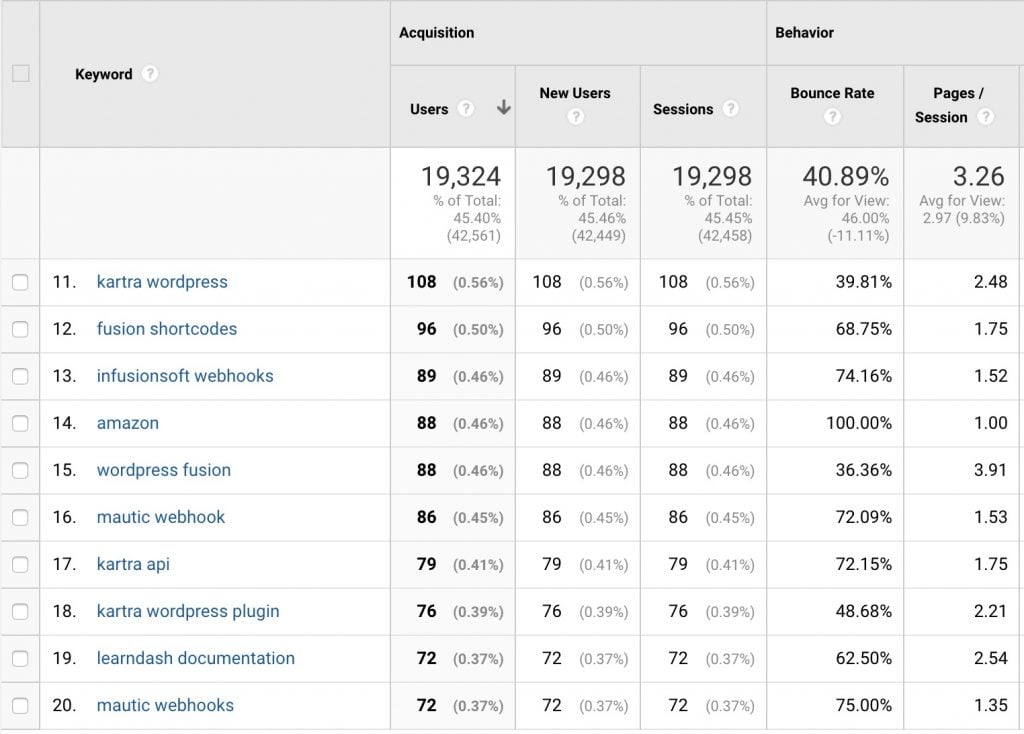 If you’re interested in getting more data out of your Organic Search stats in Analytics, I do suggest checking out Keyword Hero. I’m not an affiliate or anything, just think it’s a helpful tool.

We don’t have any major plans for WP Fusion for 2019. The core plugin is solid and these days we rarely have to make any changes to the underlying architecture.

It’s been another great year for us here at WP Fusion, but it wouldn’t be possible without you, our customers. So thank you! ❤️

Almost everything we’ve developed this year has come out of the creativity of our community, so keep those ideas coming!

Here’s to another great year together in 2019!

P.S. If you’re not already a customer and are interested in WP Fusion, you can get a license here.😉 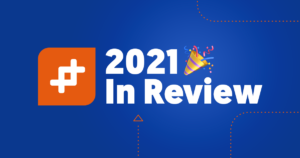 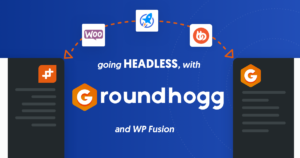 All I want for Christmas is…. faster webhooks